Challenges to Healthy Living in the Modern World

Homeopathy and the Treatment of Genital Warts

Homeopathy and the Treatment of Flus

Homeopathy and the Treatment of Flus by Deborah Olenev CCH RSHom (NA) Written on November 13, 2009 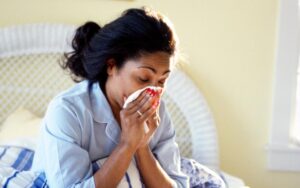 Woman with the Flu

We have all witnessed the excitement over the Swine Flu Epidemic.  I want to say a few things about it from the homeopathic perspective.  There was a fear that the swine flu epidemic could turn into a pandemic, which means a world wide epidemic, of the proportions that the world experienced in the Spanish Influenza Pandemic that ravaged the world between 1918 and 1920 that killed 22 million people, most of them young adults.

An excellent book entitled Homeopathy for Epidemics was written a few years ago by Eileen Nauman, DHM (UK).  The book is available through Homeopathic Educational Services. http://www.homeopathic.com.  Eileen gives a superb introduction to homeopathy, a history of epidemics, and materia medica of homeopathic remedies useful in epidemics.  I recommend this book highly to anyone interested in exploring this issue further.

During that epidemic there was a strikingly low mortality rate for people treated homeopathically  (a little over 1%) compared to people treated with allopathic medicine (30%).  This was due in large part to the effectiveness of homeopathic remedies to treat acute conditions, particularly once the genus epidemics was found.  The genus epidemicus is the remedy or remedies found to be most effective for that particular epidemic, once data has been gathered from a number of cases.  The genus epidemicus of the Spanish flu was Crotalus horridus by some accounts, and Gelsemium by others.

The Spanish influenza occurred at a time when aspirin was gaining popularity as a pain and fever reducing medication.  Many people attribute the high mortality rate of the Spanish flu to the use of aspirin.  People did not realize that when they took aspirin to suppress the fever, they also suppressed the body’s ability to fight the disease.   Research has shown that the high mortality rate was due much more to the widespread use of aspirin than to the influenza virus itself.  This teaches us that the worse thing we can do during an attack of influenza is take aspirin or other fever reducing medication.  The fever is your ally in overcoming the acute illness.  Don’t incapacitate your ally.

Dr. Luc De Schepper recommends taking Arsenicum album 30C once a week, by putting 2 pellets in 4 oz. of water and giving each member of the family 1 tsp. to drink, as a prophylactic for the Swine flu.  I cannot speak from personal experience about this, but if it indeed seems like you are at risk for the Swine flu, this could be something to consider.

Herscu’s Influenza Website to find out the Current Genus Epidemicus

There is a website put up by Paul Herscu , the author of The Homeopathic Treatment of Children, a great resource for parents and homeopaths alike about commonly used constitutional remedies for children.  Paul Herscu has been very concerned about the possibility of another devastating pandemic for many years.  He believes that during an epidemic many people will not have access to their homeopaths, so the best thing to do would be to put the resources that they will need to survive an epidemic at their fingertips.  To this end he has created a website called Herscu Laboratory Influenza.  Here he posts the latest research gathered from clinical experience about which remedy is most likely to be the genus epidemicus for that particular year.  Herscu presents evidence to show that the genus epidemicus of the influenza prevalent in 2007 –2008 was Phosphorous, and that the genus epidemicus for 2008 – 2009 is Nux vomica.  The website address is http://www.hersculaboratoryflu.org.

This is extremely valuable information, because by going to the website and finding out the genus epidemicus, you can safeguard your family during an epidemic without having to see your homeopath.

Risks of the Flu Shot

Western medicines’ answer to the need for a flu preventative has been the flu shot. Unfortunately this has not proven to be the panacea that was hoped for.  After years of use evidence has not shown that the flu shot actually does what it is purported to do:  reduce deaths and complications  from influenza, and prevent people from getting the flu.  The vaccine is also not without risk for both children and adults.  The vaccine contains aluminum, formaldehyde, and thimerosal amongst other ingredients, as well as half-killed viruses. Thimerosol has been linked to autism in children, and alzheimer’s in adults.  Many people also believe that the flu shot actually helps to spread the flu, as people often do develop flu-like symptoms from the shot and are contagious during this time.  The Center for Disease Control is telling people that the only the way to protect themselves in the event of a influenza pandemic is to get the flu shot.  This needs to be seriously called into question.  In homeopathy there is a better way.

In the January 2009 issue of my newsletter I mention many natural things you can take for boosting your immunity during a cold or flu.  Some things not to forget are large doses of Vitamin C, Echinacea, herbs such as Astragalus, and the wonderful Chinese herb, Windbreaker at the first sign of a cold.  Of course, the absolute best protection is afforded by being on a well selected homeopathic constitutional remedy.  Another remedy that could prove very effective during an influenza epidemic is Oscillococinum.  This would be an excellent remedy to take at the onset of a flu, where you don’t have clear indications for an acute or constitutional remedy.  If you are already on a constitutional remedy this can potentially interfere with your remedy.

Thank goodness the Swine Flu scare turned out to be just that, a scare, but still we have to be aware that pandemics have occurred in the past and they can occur again.  Having wonderful resources available to us through the internet, which allows us to be well-informed can make the difference in our ability to safely navigate through such epidemics.  I want to say thank you to Paul Herscu and other people who are posting research about the genus epidemicus on the web.  Wishing all my friends the best of health.

In the spirit of friendship,