The Bowel Nosodes: A Missing Key

The Bowel Nosodes: A Missing Key 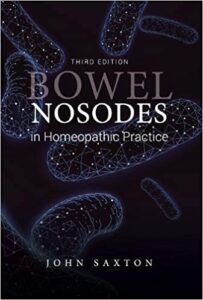 Homeopathy promises miracles, but people can sometimes go from one homeopath to another and take many remedies over years, each of them helping, but in some cases falling short of delivering the gift of health.

What is health? Freedom from pain and illness and energy and vitality to use your body, mind and spirit as an instrument of your will.

The pioneers in the field of the bowel nosodes were Dr. Edward Bach, who later went on to develop the Bach Flower Remedies, and Drs. Elizabeth and John Patterson, and Dr. Wheeler.

Each of these have their own material media and remedy picture. Each bowel nosode is also affiliated with a range of constitutional remedies. There is an original list of the affiliated remedies, which was subsequently expanded upon due to the introduction of new remedies and greater clinical experience with the bowel nosodes.

The relationship of the bowel nosodes and constitutional remedies is often one of complementary remedy, as in the case of the well-known triad of Calcanea carbonica, Sulphur and Lycopodium.

The relationship is not one of acute remedy to chronic remedy as in Bryonia, the acute, to Natrum muriaticum, the chronic.

The relationship is rather one of association and a supportive function, but sometimes the bowel nosode can stand alone as the therapeutic agent needed for healing.

The bowel nosodes can be given in close proximity to the constitutional remedy—and suddenly the constitutional remedy, which you may have tried before with less than satisfying results—works in a deep transformative way. Or the bowel nosode can be given and observed over a long period of time to allow the healing process on it to unfold uninterrupted.

With the bowel nosodes the process of restoration of health can be sped up exponentially, and the process of what homeopathy can do is revealed in a more rapid manner.

Many people have had the experience of working with a homeopath for years, but the goal of optimal health eludes them. Or they can go from one highly acclaimed homeopath to the next, who often is brilliant and prescribes good remedies, but again the results are less than what is hoped—what may be missing is knowledge of the bowel nosodes and how to use them.

I am happy to say that I have seen beautiful healing in some of my clients with the bowel nosodes. The main source of my information is from a book called Bowel Nosodes in Homeopathic Practice Third Edition by John Saxton. Richard Pitt also talks about the bowel nosodes in his book Comparative Materia Medica. Frans Vermeulen includes the bowel nosodes in his material medicas, and so does Robin Murphy in Nature’s Materia Medica. I recommend John Saxton’s book very highly, because he gives wonderful case examples, and also talks about the history of the development of the bowel nosodes. John Saxton is a homeopathic veterinarian. When you read the case presentations in his book, you will be impressed by the quality of his work as a classical homeopath. May all homeopaths practice to his level of diligence and astuteness. We owe him and all the pioneers in this field a debt of gratitude.

Themes of the Bowel Nosodes as per John Saxton’s book page 42. I am going to quote exactly what he says below:

“The key themes of the bowel nosodes are as follows:

Bacillus No. 7
Mental and physical fatigue

Bacillus No 10
Fluorine (lack of restraint, destructive pushing of boundaries

Miasmatic Association of the Bowel Nosodes as per John Saxton’s book page 22.

In the appendix of John Saxton’s book from page 175 to 178 he presents the expanded associated remedy list. This is a list expanded from the original list put together by Drs. Elizabeth and John Patterson in 1949. I refer to the expanded list all the time when I am searching for bowel nosodes associated with a particular constitutional remedy that I am considering for my client.

Another good way to try to determine which bowel nosode may be needed is to limit your search in your software to Bacteria, and see what comes up. If you have an unusual symptom appearing under one of the bowel nosodes that you have not been able to address with what looked like a good constitutional remedy take this hint to examine the bowel nosode.

A Note to my Homeopathic Colleagues

For example I helped a family where the wife was subject to extreme rages with Proteus. I helped another woman with severe diabetes and emaciation regain her health with Morgan Gaertner. She was also taking insulin. These are accomplishments that would not have occurred had I not known the bowel nosodes.

God bless all homeopaths and healers. This is joyous divine work.

Wishing you health and happiness,