Vaccine Mandates and the Historical Background 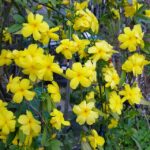 The featured article this month is about the materia media of Gelsemium sempervirens. The reason I chose this remedy is that it is the remedy that has helped me with COVID long-haul symptoms.

While I was working on this article and studying the mental symptoms, I was struck by what a wide scope this remedy has, and how many people it has the potential to help. If everyone reading this article, could see the picture of one person in the image of this remedy, think of how many people could benefit.

Going down the list of mental symptoms alphabetically, I was surprised to see: shrieking, shouting, children, fever, during. My eight year old grand-daughter came down with a fever, headache, vomiting and ear pain a few days ago. She had similar symptoms when she had COVID a month and a half ago, and was helped with Belladonna 30C at that time. Since these symptoms returned, we decided to repeat Belladonna 30C but a day later she was still not feeling well. After learning about this symptom while studying Gelsemium, I was prompted to test Gelsemium for her and we gave her a 200C as a remedy for this acute illness. She felt much better the next day.

Gelsemium is the remedy that all homeopaths are trained to think of for people who have never been well since a flu. In the modern age you can substitute the word COVID for flu.

I got sick with COVID on January 14th, 2022. I am writing this article on March 1st. The three remedies that helped me through the sickness were:

What I found with my COVID19 experience is that the remedies I took helped tremendously, yet there was a tendency to relapse. This reminded me of having a fruitfly infestation in the house. You may think you have gotten rid of the infestation, but if there are two fruitflies remaining, it will come back.

At the end of the battle I thought of Gelsemium. I had tested myself earlier on for this remedy, but it did not test well for me in the earlier stages of the illness. I thought of Gelsemium this time with the idea that I have not been well since getting COVID. The symptom that was not clearing was a cough that originated at the base of the throat. This is a target area for Gelsemium. It is also a target area for COVID19.

The other symptom that prompted me to think of Gelsemium was that I experienced ailments from anticipatory anxiety, which is one of the big guiding symptoms to Gelsemium (as well as to Dysentery Co. and Argentum nitricum). The Gelsemium dose helped me globally – I saw improvements in energy, the gut microbiome, creativity, and the lingering cough cleared. It took about ten days for the cough to totally clear.

My feeling about COVID19 is that it creates a comorbidity in some people. This means that side by side with their constitutional state there now exists a new entity that occupies the illness landscape within the person.

If you give the constitutional remedy, it should help with the constitutional (chronic) symptoms, but it may not have an impact on the COVID long haul symptoms. This is where Gelsemium, or another indicated remedy can come in to resolve the illness. I want to stress the words, ” another indicated remedy. ”  Gelsemium will work when it is indicated, which means that the symptoms of the patient match the symptom profile of the remedy. When  they do not match, the remedy will not be effective.  This is why good case taking, repertorization, and materia medica  are important.

Gelsemium was the number one genus epidemics remedy for the Spanish Flu Pandemic of 1918. I believe that we should also consider it as a major remedy for COVID19 and for people who have never been well since contracting this illness.

Now I would like to go to the classic materia medicas and piece together a picture of Gelsemium sempervirens for you.

Gelsemium was introduced to homeopathy by E.M. Hale, an American homeopath. The common name for Gelsemium is yellow jasmine. The remedy is made from the tincture of the bark of the root.(Murphy)

Let’s start with the mind symptoms. Here the important symptoms to remember are:

Anticipatory anxiety. It is this symptom which prompted me to take Gelsemium for myself. I had made an appointment to meet a prospective tenant for a commercial building that I manage for my father at 8:30 a.m. My psyche interpreted this as a new situation, an ordeal, an unusual event with an unknown person. The anxiety this produced caused me to have insomnia. It also made me get out of bed and test Gelsemium for myself. This event was a blessing in disguise, because it gave me the information I needed to resolve my COVID symptoms. I interpreted my insomnia to ailments from anticipatory anxiety.

Searching through the Mind section of the Complete Repertory by Roger Van Zandvoort I found the following additional guiding symptoms. This is not a complete list.

Clinging children. Child will always take the hand of the parent.

on attempting to has a vacant feeling
studying, reading, while (these were my son’s symptoms)

Confidence, want of self

Confusion, there are lots of symptoms relating to mental confusion.

animals, snakes around her.
about to die.
enlarged, falling, errors of identity, phantoms
becoming insane
he is incorporeal, immaterial
has been poisoned
someone else is sick
that he cannot succeed, does everything wrong
heart stops beating when sitting
body parts lighter than air

diarrhea from
before examination
of being alone, yet aversion to company
of death
of the dark
during parturition
fear of failure
in work or business. (Similar to Bryonia, another great remedy for COVID19)
fear of falling (very important guiding symptom).
in children while being carried.
something bad will happen
heart will cease beating
high places
of being injured
of insanity, losing his reason
of motion, downward motion (Borax, Argentum nitricum)
ordeals
anthropophobia
of public places
approach of thunderstorms (Phosphorus, Rhododendron, Rhus tox)
of water
fearlessness

during pregnancy and delivery

Jumping, impulse to from a height o a window

Looked at, aversion to being

in children during fever (Aconite, Belladonna, Chamomilla, Cina)
with the pain
brain cry

Spoken to, averse to being

Stupefaction, as if intoxicated

from thickness of tongue

mood
in children
if not constantly talking

Doing the same thing I did for the mind section, I will go down and pick out the big themes in the generals section. Generals are symptoms that pertain to the whole person and not just a part of the person.

Periodicity (this refers to a pattern of symptoms coming back at certain intervals)
summer, spring, annually (China, Arsenicum, Natrum muriaticum)

Apoplexy (another word for a stroke or cerebral hemorrhage)

from fright
from nervous complaints, during pregnancy, hysterical

Constriction as of a band

ailments during
infectious diseases after

after anger
after fright
during headache
from pain
from surprise

Heaviness: internal and external (This is a major Gelsemium guiding symptom).

Intoxication, sensation of (Gelsemium is in bold for this).

Lie down, inclination to

aggravates and ameliorates and aversion to
downward motion aggravates (Borax)

Paralysis (This is the symptom that some of the old material medical place great emphasis on).

Pulse (There are many symptoms relating to the pulse.)

Riding in cars or wagons ameliorates

Sluggishness of the body

Weakness, enervating, exhaustion, prostration, infirmity
(There are many symptoms relating to this. This is a good remedy for chronic fatigue).

after delivery,
sudden from fight
acute diseases
excitement after
exertion agg
during fever
during headache
from heat
after influenza
occupation jags
motion ameliorates
from perspiration
after sleep
after urination
with vertigo
with infirmity of muscles
excessive
paralytic
tremulous

PARTICULAR SYMPTOMS THAT STAND OUT. These are symptoms that relate to parts of the body rather than the whole. I am only going to mention one area of the body, the eyes, because much emphasis has been placed on these symptoms in the material medicas. This article would be excessively long if I were to mention all areas of the body and the particular symptoms relating to them.

EYES Gelsemium has many important symptoms relating to the eyes.

Ptosis, or falling of the lids
Heaviness of the eyes
Opening the eyes with difficulty.
Has to use his fingers to raise the lids
Paralysis of the optic nerve.

In a crisis situation, it is not always possible to find a homeopath who is seeing clients and is available to see you or your family members, so learning a little bit about some of the wonderful acute and trauma remedies in homeopathy can save a life and save the day.

The history of homeopathy is that in the 1800s, many people in rural America had homeopathic kits and a little material media with a repertory, such as Boenninghausen’s Therapeutic Pocket Book, or Boericke’s  Materia Medica with Repertory that they referred to. That is how the pioneer housewife and country doctor often kept their families and communities healthy. We can do the same nowadays. We can order remedies on Amazon or from reputable pharmacies, like Boiron, Hahnemann Labs, Washington Homeopathics, and www.HomeopathicRemediesOnline.com. We can buy materia medicas and repertories from booksellers like Homeopathic Educational Services and we can help our families the way the pioneer wives and doctors helped theirs.

Let’s keep this exquisite system of medicine alive and vibrant by studying it, and applying what you learn to the sick. It has now been forty years since I received Kent’s Repertory in the mail and was shocked by its complexity, but I was determined to learn it, because I needed healing, and there were sick people around me who needed healing and it was my destiny to be of service in this way.

During this forty years my passion for this therapeutic art has grown daily. My love for it is boundless. The reason for this is that it works. Very very simple. It works. I have to add a caveat: It works when the  homeopathic principals taught to us by Samuel Hahnemann, the founder of homeopathy are properly applied.

On a final note, I want to thank all the compilers of homeopathic materia medicas and repertories.  Working on this Gelsemium article took a lot of time and energy. I have to acknowledge the energy and dedication of people who compile all this information about thousands of remedies in tremendous detail, manage to get it published, and put into our books and software. Thank you for your immense service to Homeopathy and the people on our planet.

I want to give a special thank you to Dr. Robin Murphy, who passed away in 2021 for his lifetime of service to homeopathy, and for the materia medicas and reportories that he wrote.

Wishing you health and happiness,